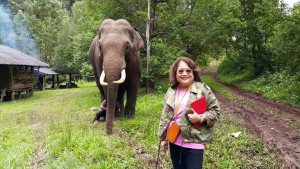 My first encounter with wild Thai elephants and their mahouts occurred when I was about nine or ten years old. My father worked for the government in the Forest Industry Organization of Thailand. I followed him to volunteer and help villagers fight against Malaria. I was assigned to be an assistant for a projectionist, screening a classic American feature film for an outdoor theatre at a community event. Early on Sunday morning, I got up and waited to see the group of wild elephants with mahouts as they came out of the forest and walked down the road in front of my house. They were tall and majestic. The mahouts with their cloths wrapped over their heads, like Khmer tribal men, looked graceful. These elephants in motion captured my eyes and heart in a way I would never forget.

After 9/11, I left Battery Park City, ground zero of the tragedy in New York, to search for soul in my native country, Thailand, seeking a healing path in the Thai Buddhist ecological life. While in production on a feature documentary called Building for Life: Moving AIDS to the Positive Light, I had travelled to the Thai Elephant Conservation Center (TECC), Lampang province. At the elephant nursery, I met the first born baby elephant by an artificial insemination, using the frozen sperm of a healthy juvenile male elephant named Chapati. The King of Thailand had given a special name to the baby elephant, Pathom Sompop (the first born child). Most tourists called him “AI.”

Chapati, the father elephant, also had a fascinating story from Israel. He was born in Rramt Gan Safari, the zoological center of Tel Aviv. Like his son, Chapati had not been accepted by his mother an Indian elephant. Then the zoologists moved Baby Chapati to the Tisch Family Zoological Gardens (Biblical Zoo) in Jerusalem, where he lived with the Thai caretaker who fed him the special formula milk, which was produced by the largest baby powdered milk company in Israel. As he was growing up to be a young male elephant, Chapati weathered the life transition from being a baby elephant in Israel to a teen-aged and juvenile elephant in Thailand.

At the Thai Elephant Conservation Center, I learned many life stories of Thai baby orphaned elephants – how they experienced trauma and fear due to the loss of their mothers and habitat, how they learned the positive training approach, and how the Thai mahouts/ caretakers could help them discover essential coping skills through the art of logging techniques and painting. Then these elephants could become resilient when they had to face a life crisis, deadly disease or injury. The mahout-elephant bonding relationship taught me how I could bring change to my life from within.

My intention in creating Elephants in Motion is to reach viewers who feel disconnected from themselves and/or the superficiality of today’s culture, and who seek to find balance and resiliency among life’s many twists and turns. In my view, the key to well-being is in a person’s coping skills. In this film, we can learn from the elephants’ struggles to survive, and use their eyes as a window to our soul.

Narumol Sriyanond, PhD, Producer/Director, a winner of 2006 WIF/GM Alliance Acceleration Grant for Emerging Filmmakers: Women in Film GM. Produced and directed Thai Women: Challenging AIDS , a 10 minute short documentary film, exploring how Northern Thai women with HIV/AIDS use their creative and spiritual strength to challenge the societal stigma.  Produced and Directed dance performances at Tribeca Performing Arts Center, 1990-1999, captured the essence of Thai dance, andhip hop movements into the dance practice. As a consulting Producer,negotiated a cultural partnership and served as liaison between The Joseph Papp Theater Company, The Asia Society, The Cultural Affairs Department of Thailand. She earned her MFA (Film and Television) and PHD (Performance Studies), Tisch School of the Arts, New York University